Fiscal stimulus, which was central to the market rebound in the last year, may start moving to the sidelines over the rest of 2021 and into 2022 as the recovery continues. Economic growth can compensate for the loss of government checks to households and businesses, but potential tax increases may be more challenging for markets to navigate. Business tax increases, in particular, may gradually pull gains out of markets about equal to their size, but with economic growth supporting corporate earnings, we believe a positive backdrop for equities remains in place.

During much of 2020 and early 2021, markets were focused on fiscal policy due to massive government efforts to help bridge the economy past the impact of COVID-19 restrictions. Markets liked stimulus as much in 2020 and 2021 as in 2009, and, to a smaller extent, 2018. Policy will still matter over the rest of 2021 and into 2022, but it will matter far less—despite some important debates going on in Washington. Markets may anticipate an increase in government spending if Congress passes some version of the Biden administration’s Build Back Better (BBB) initiative, but that spending will likely be spread out over almost a decade. The biggest risk may be around taxes, with businesses and wealthy households both facing the prospect of a higher tax burden to pay for BBB and help manage the deficit.

Much of the approximately $5 trillion in direct COVID-19 related stimulus in 2020 and 2021 did not flow through directly as government spending. Instead, the federal government used its borrowing power to distribute funds to households and businesses. That impact will fade over the reminder of the year but will be replaced by the private economy accelerating. There is some threat of a fiscal headwind from the decline in government largesse, but that headwind will be felt only if the private economy can’t make up the difference and we continue to expect above-average growth well into 2022.

Actual government spending is likely to continue to grow, but the rate of growth will not make a large difference to overall output in our more than $20 trillion economy. According to the Bureau of Economic Analysis, federal spending added an average of about 0.15% per year to gross domestic product (GDP) growth between 2000 and 2020, with defense and non-defense spending each contributing about half of that. Federal spending has not contributed more than 0.5% to GDP growth since 1986 and contributed only 0.29% in 2020. COVID-19 stimulus was more about borrowing and writing checks to businesses and households than growth in direct government spending.

But even a small contribution to GDP growth can be massive in absolute terms. With proposals for the two pieces of BBB reaching nearly $4 trillion—including $1.8 trillion for the American Families Plan (AFP) and more than $2 trillion for the infrastructure bill (known as the American Jobs Plan or AJP)—higher taxes would be needed to help finance the new initiatives. Let’s be clear though: With a 50/50 Senate (Vice President Kamala Harris breaks ties) and historically slim Democratic majority in the House, we think these final numbers will likely come at $2–2.5 trillion combined, as these initial numbers from the Democrats were a starting point for negotiations.

Taxes May Change Market Path, But Not Direction

Federal spending is generally funded by taxes or debt, and the Biden administration plans to raise taxes to help pay for BBB. President Biden has proposed increasing taxes on both corporations and wealthy households, including an increase in the capital gains tax, the tax on investment profits. Markets so far have taken the proposed changes in stride, largely due to expectations that the proposed tax increases will be reduced during negotiations and the economy will be strong enough to absorb the impact.

The Tax Cuts and Jobs Act (TCJA), signed into law by President Trump in December 2017, reduced the top tax rate on corporations from 35%, where it had been since 1993, to 21%. Before the TCJA, the top U.S. statutory corporate tax rate had not been under 30% since the 1940s. There were also other structural reforms in the TCJA, including changes to the way U.S. corporate profits from abroad are taxed, in an attempt to make U.S. companies more competitive.

President Biden has proposed increasing the corporate tax rate to 28%, but that should be viewed as a bargaining position and we believe the more likely outcome is that we see the rate end up closer to 25%. Alternative approaches, such as increasing the minimum tax on businesses and raising the top rate less—or not at all, are becoming part of the conversation. The negative news for markets is that corporate earnings growth will likely take a direct hit that is approximately equal to the size of any tax hike. Because the stock market is fundamentally driven by earnings growth, the tax impact will likely be a headwind for equity markets. On the positive side, this move has been anticipated for quite some time and should not be much of a surprise to markets. Further, as shown in [Figure 1], excluding the TCJA rate, this will still be the lowest tax rate in about 70 years and the effective tax rate has also declined. 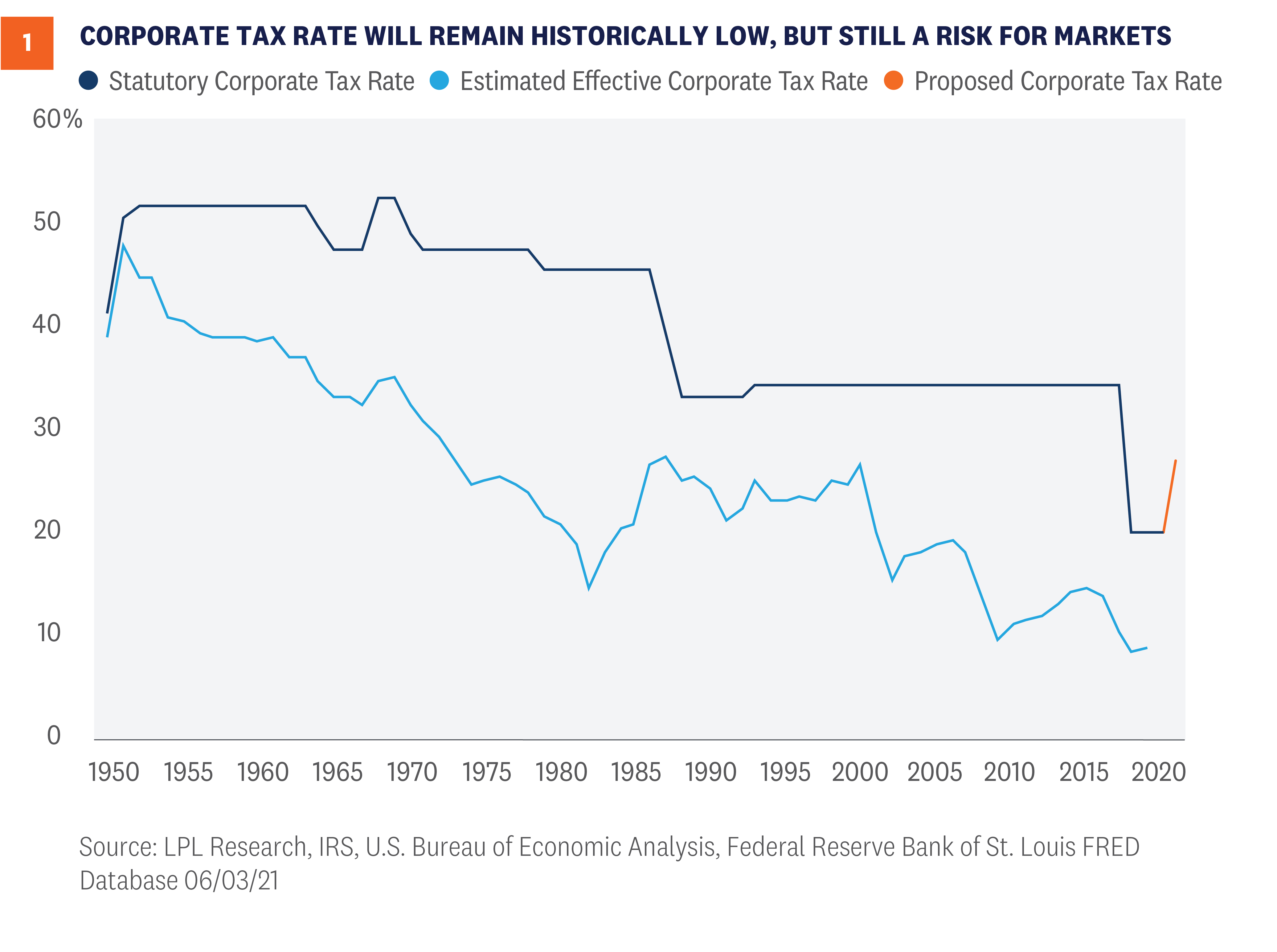 While the general direction of corporate tax rates has been lower for most of the last 70 years, how has the market been impacted when we have had tax increases? As shown in [Figure 2], markets historically have absorbed higher corporate tax rates, although with below-average returns. While we don’t think higher rates would be retroactive, they could take away some of the momentum from recent upside surprises in earnings growth we’ve seen so far in 2021 and contribute to a choppier market. 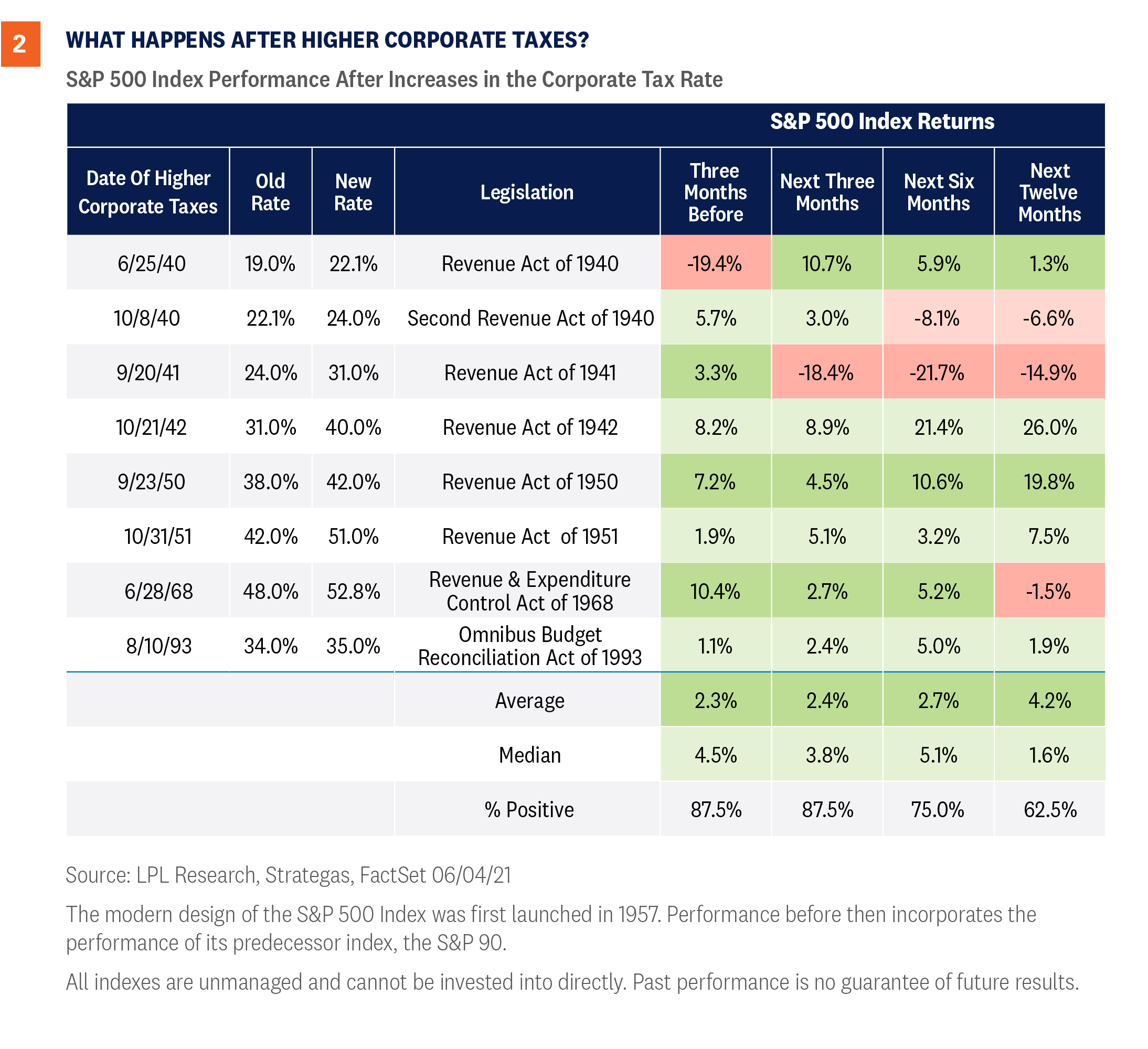 Proposed tax provisions to raise funds for BBB on the household side include increasing the top tax rate on ordinary income from 37% to 39.6%, and raising the capital gains and dividends taxes on those who earn more than $1 million to a maximum of 43.4% from the current 23.8%—a stunning increase if fully instituted. At the same time, only 0.32% of the population makes more than $1 million a year, so the truth is this won’t impact the other 99.68% of the population.

Looking at history, capital gains taxes did increase in 1986 and 2013, but the economy was on firm footing and the S&P 500 produced gains of more than 9% and 25%, respectively, over the following twelve months. On the other hand, the S&P 500 declined in the twelve months following capital gains increases in 1969 and 1976, which saw an economy marred by higher inflation and sluggish growth. Is it as simple as how the economy is doing? Policy matters, but broader economic trends matter more. If we see a capital gains tax increase, we do expect some investors may rotate out of equities and seek more tax-friendly opportunities, but that would have to be balanced against the decision to accelerate capital gains. Long-term investors may simply wait out the new rate on expectations that it may be changed again by a subsequent administration.

Which brings us to the final point—the durability of any large policy change in an era of near political balance. President Biden is unwinding some policies of the Trump administration, and President Trump unwound policies of the Obama administration. Neither party has held the White House for more than eight years since Bush beat Dukakis. Congress has also been hotly contested with more frequent swings. Over the last 40 years, the House has changed hands seven times and the Senate four. If you don’t like the policy environment, wait a few years—we’ll get a new one. The American electorate is nearly evenly divided right now, fostering more frequent swings, and also a certain wisdom in rejecting the excesses of both parties.

Looking to 2022, mid-terms in the House historically have a strong tendency to swing away from the party that holds the presidency. The president’s party has lost ground in the House in every mid-term since 1938 except two (1998 and 2002), with an average swing of just under 30 seats. An already evenly balanced House makes a large swing less likely, but with Democrats holding just an eight-seat advantage right now (with several vacancies) and some added hurdles for Democrats from redistricting, the Republicans are favorites to retake the House.

The Senate is evenly divided right now, which makes a swing more plausible. However, only about a third of the Senate seats are up for grabs in any election and the 2022 map favors the Democrats, who only have to defend 14 seats while the Republicans have to defend 20. (Republicans have the advantage in 2024.) This math suggests that the Democrats are likely to hold the Senate.

We’ve often commented that markets tend to like mixed government and we may have one ahead—if not in 2022, then very likely not much further down the road. While we don’t know the outcome of the election, what we do know is that policies will change, which means markets will be looking most closely at the near-term impact of policy changes, rather than their enduring legacy.

The massive fiscal and monetary policy support that helped the economy (and the stock market) get through the pandemic is starting to move toward the sidelines. Markets like stimulus, and even a gradual move to the sidelines may cause some bumps. But overall, we think that macroeconomic conditions, rather than policy, will be the most important driver of the return environment in the year ahead. We are watching negotiations over corporate taxes closely, but if history holds true, tax increases may slow markets, but they shouldn’t fundamentally shift the return outlook. U.S. businesses remain agile, and even with the potential hit from higher taxes, there will be plenty of opportunities ahead.

This material is for general information only and is not intended to provide specific advice or recommendations for any individual. There is no assurance that the views or strategies discussed are suitable for all investors or will yield positive outcomes. Investing involves risks including possible loss of principal. Any economic forecasts set forth may not develop as predicted and are subject to change.

References to markets, asset classes, and sectors are generally regarding the corresponding market index. Indexes are unmanaged statistical composites and cannot be invested into directly. Index performance is not indicative of the performance of any investment and do not reflect fees, expenses, or sales charges. All performance referenced is historical and is no guarantee of future results.

Any company names noted herein are for educational purposes only and not an indication of trading intent or a solicitation of their products or services. LPL Financial doesn’t provide research on individual equities.

All information is believed to be from reliable sources; however, LPL Financial makes no representation as to its completeness or accuracy.

The Standard & Poor’s 500 Index (S&P500) is a capitalization-weighted index of 500 stocks designed to measure performance of the broad domestic economy through changes in the aggregate market value of 500 stocks representing all major industries.

The PE ratio (price-to-earnings ratio) is a measure of the price paid for a share relative to the annual net income or profit earned by the firm per share. It is a financial ratio used for valuation: a higher PE ratio means that investors are paying more for each unit of net income, so the stock is more expensive compared to one with lower PE ratio.

Earnings per share (EPS) is the portion of a company’s profit allocated to each outstanding share of common stock. EPS serves as an indicator of a company’s profitability. Earnings per share is generally considered to be the single most important variable in determining a share’s price. It is also a major component used to calculate the price-to-earnings valuation ratio.

All index data from FactSet.

This research material has been prepared by LPL Financial LLC.